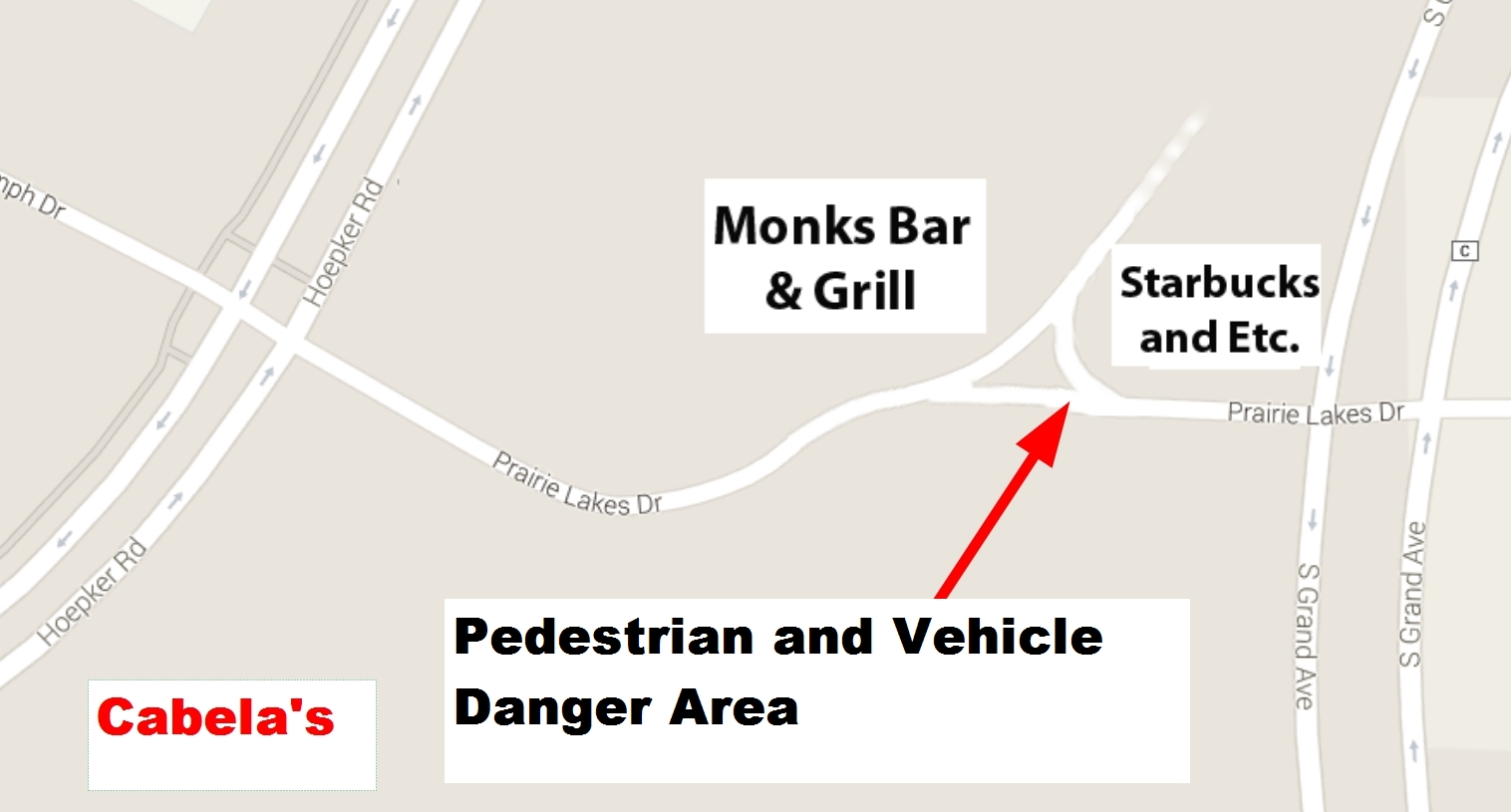 Previously, the city had followed the oh so wise directions of the State and made Prairie Lakes Drive twist and turn so that it would slow down traffic and discourage people from using the street. That turned out to be an incredible lack of judgement. They didn't want people using this street as a cut-through (I was told by the City) since it is such a shorter distance to travel rather than going all the way down to Target and turning there.

People were not only using the shortest distance from A to B but they were cutting from lane to lane because one lane is for turning LEFT and one for going straight or turning right. This is still happening even after the thousands of dollars spent to "FIX" the street, because drivers don't see that, when they get into that left lane, going West, that they are going to end up in the Left Hand Turn Lane and they really wanted to go STRAIGHT to go to Costco. Then you still have people, at the last minute, either on purpose or by accident, cutting in front of other people to get into the "go straight" lane so they can cross Hoepker Road and get to Costco. It is still a stinking mess but just not so much of a "Le Mans raceway" stinking mess, as before.

It is all a matter of control.

The city never wanted people to use this "shortcut" to go through the Prairie Lakes Shopping Center area. But people are not STUPID! They see the shortest way and take it. Who is going to drive all the way down to Target and turn there??? The city is also trying to control traffic by making the wait to get across Hoepker Road, to either go East or West on Triumph or Prairie Lakes Drive, almost unbearable. You get up to that light and you just sit there and sit there while there is little traffic on Hoepker. Good place to do your texting or emailing but try to pay a little bit of attention because, when that light changes, you have virtually seconds to make it across and then the interminable wait begins again.

And now that they have "FIXED" Prairie Lakes Drive, they have put in an obstruction that could potentially cost visitors to the Prairie Lakes Shopping Center thousands of dollars over what they intended to spend there. I doubt that these visitors will come back after damagning their cars on something the city designed to be a problem, deliberately.

(Can you imagine what is going to happen if you are just a little bit off because someone is crowding you from the left, when you hit that 6 inch "bump" in the road? Judging by the tire marks, at least one person already hit it and, if they do not have multiple hundreds of dollars in repairs, I would be very surprised. )

The city, in all it's wisdom, has put a pedestrian crossing median with a huge hump directly in the traffic. Anyone that has someone on his/her left side is going to be having to carefully watch the driver on the left that is going to be cutting in front, so as to get in the right lane, and also having to watch out for the "front end damages bump" that is going to cause thousands of dollars worth of damage to their front end. That bump is about 1 foot or less away from the designated lane. If you think potholes are bad, give this bump a try to set yourself straight.

I have been driving for 51 years and I have never seen an obstruction like this, deliberately placed in harm's way in the roadway. Better to put a "speed bump" in than to put something in that may make you lose control of your vehicle and/or cause thousands of dollars damage to it, or even kill a pedestrian.

I am sure this is also now done all in the name of SLOWING traffic down but it is quite dangerous. And, anyone that is stupid enough to walk out on that island to walk across on the crosswalk, deserves to get whatever happens because it is obvious that you are walking into flowing traffic and the grieving relatives should sue those who decided that this is a good idea. There are better crossing options within feet of that same area.

Good news for CarX or similar front end repair services: this will be a good spot to open a store.