Sun Prairie aldermen, on July 24, approved a precise implementation plan for a new 5,600 square foot Pizza Ranch restaurant to be constructed just south of the Target store on Grand Avenue. Co-applicant Ken Dressen said he intends the construction of the restaurant to be completed in four months. That would put completion in November or December of 2012. We are looking forward to Pizza Ranch in Sun Prairie.

Hard to tell from any reports but the Pizza Ranch location will be in the approximate location where the X is. 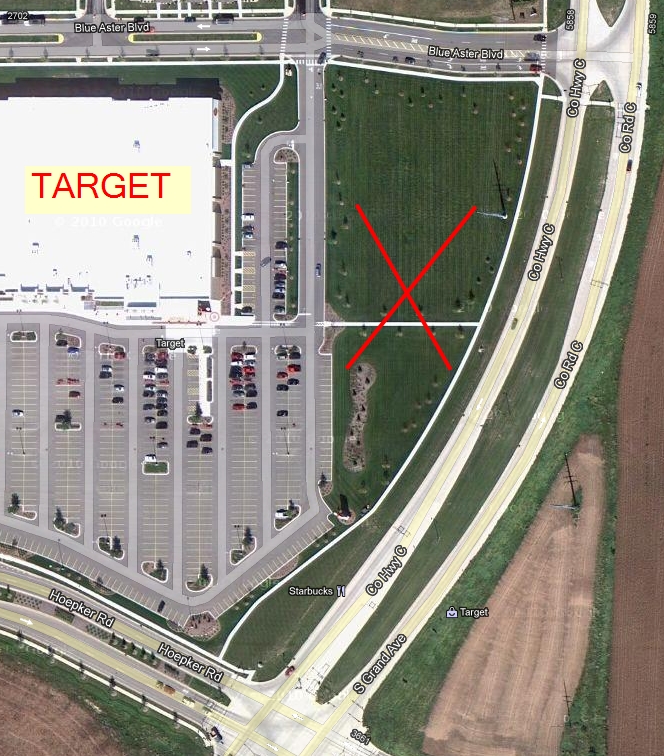 The Sun Prairi City Council approved a development agreement for Lot 2 of Prairie Lakes, which will be used by Pizza Ranch. The agreement includes a surety of $48,318.05 and an improvement review fee of $120.80.

Pizza Ranch is coming to Sun Prairie, at least it is in the works. On June 12, 2012, the Sun Prairie Planning commision tabled a precise implementation plan (PIP) request by Ken and Mary Jo Dressen to develop the new restaurant on South Grand Avenue near the Sun Prairie Target store. Not sure but, I would say that the restaurant will be directly on Grand Avenue, to the East of the Target store, otherwise there would be no reason for Pizza Ranch to use the Target parking lot. This would give a prime street side location for the Pizza Ranch.

Our family has always enjoyed eating at the Pizza Ranch whenever we go to the Wisconsin Dells and we look forward to seeing it in Sun Prairie.

The Planning Commission will take up the PIP request again on July 10, by which time Scott Kugler said he hoped to have the certified survey map and final comments in hand from Target and Prairie Development Ltd., including landscaping plans. If approved by the Planning Commission, then the Sun Prairie City Council will have to approve the plans.

Pizza Ranch features pizza, chicken, salads and desserts in a famous “mile long buffet.” Hours of operation will be 11 a.m.-10 p.m. seven days a week at the restaurant, which will employ 65-75 people.

If approval is granted by mid July, the Dressen plan on a four month construction schedule and anticipate opening in November of 2012.

This is another piece of the Prairie Lakes Development puzzle. Now, how far away can the Marcus Theater be?

The first restaurant opened December 21, 1981 in Hull, Iowa. The six original house pizzas were the Round Up, Sweet Swine, Texan, Bronco, Prairie and Sagebrush. In the beginning Pizza Ranch only offered a Tuesday night Buffet while the rest of the dinning hours were for take out or dine in orders. The second Pizza Ranched opened in Orange City in 1983 where the first noon buffet was introduced. In 1987, with the addition of a Sioux City restaurant, the menu expanded to offer chicken.

Pizza Ranch has grown over the years and now has franchises in ten states. Pizza Ranch's specialty is their pizza, and chicken. Their headquarters, formerly located in Hull, Iowa are currently located in Orange City, Iowa.

Pizza Ranch is a Christian based company. This can be seen on their mission/vision posters in their restaurants and on their website. The Pizza Ranch vision is "To glorify God by positively impacting the world we live in."

The chain has become a popular stop for presidential candidates during the Iowa caucuses.

Customers have two options; ordering off the menu or (at designated times) eating from the buffet.