Update: On November 17th the Sun Prairie City Council voted to approve the building of the Menard's Home Improvement store in Sun Prairie.

One major company that opposed Menard's is Chase Lumber, a family owned business. They said that they offered the same services as Menard's.That is just not true and that also goes for the few hardware stores in Sun Prairie that are in direct competition with Menards. I'm sorry but the locals all are just more expensive than Menard's and I, for one, have been having to drive five miles or so, one way, to East Towne to get my hardware items just because I know that so many things the locals just would not have and, if they did have them, the prices would be much higher.

The property that Menard's wants to build on still needs to be annexed to the City of Sun Prairie.

Competition is a bitch if you are used to having a monopoly. And, Menard's was not going to stay at East Towne. They had outgrown the property. They were going to move somewhere and I, for one, am glad that they will now only be less than a mile or so away from my house. Wish they had been here for the past ten years; would have saved me a lot of gas and time.

Update: On October 13th, Menard's will be providing a brief update to the plan commission at the Oct. 13 meeting, but no staff report will be provided and no action will be taken at that meeting on either item. Menard's has asked to wait until November to formally bring the items before the commission.

Menard's is tentatively on the Planning Commission schedule for October 13th, 2015.

" I anticipate that this will be an interesting discussion. It is my understanding that Menard's is seeking all the approvals it needs from the city to build the new store on S. Grand Ave., except annexation and rezoning. The current property owner wants to make sure the land purchase and development will go through before he will allow his property to be annexed into the city. A request for annexation and rezoning will follow if Menard's gets what it wants from the Plan Commission on October 13 and from the City Council at a subsequent meeting."

So, if you are wondering where the ads are from Menard's in the Wisconsin State Journal, they are no longer there. It seemed like many weeks had gone by without my getting an ad from Menard's in my Sunday paper. So, I sent an email to Menard's and asked what was going on. Mic Nelson, circulation analyst for Menard's got back to me and says that they no longer advertise in the Journal. That has to hurt the Journal because Menard's ads came at least once a week and lots of times more often. You can still get your Menard's ads from "The Hometown Advertiser". Mic signed me up for it so I don't know how you can get your own subscription.

You can also view the weekly and other Menard's ads on their website, from this link.

Every time I say that I have had enough of that paper, my wife says: "but what about the ads?" Well, maybe the Hometown Advertiser will take care of that problem for me.

No updates on any progress for the proposed Menard's store in Sun Prairie.

Last night, the Planning Commission gave "Conditional Approval" for a future Menard's store in Sun Prairie. This was despite a heroic defense of "The Plan" by Scott Kuglar and his team of planners. The motion to approve was passed by six for it and three against. Notably, one of the people against was Mayor Freund.

Does the "Conditional Approval" now go to the Common Council? Not sure if or when that will happen since the City has not been keeping the Calendar up to date for quite some time. Nothing is scheduled even for next week. Not much point to the calendar when it only tells you what happened and not what is going to happen. Typically, items like this, appear as an item on the next meeting of the Common Council following the Planning Commission. That might be on 11/18/2014 but we can't tell since there is nothing on the Calendar as we write this.

Apparently, if Menard's gets "Conditional Approval" from the Council, then they would go through the process of getting the land, which is in the City or Town of Burke, to be annexed by Sun Prairie. Then they will sit down with the city planners and they say they will do whatever is needed to get the building approved. Then they would go before the Planning Commission and the Common Council once again to get full approval. The Conditional Approval is just to see if the City is at all interested in having Menard's build in Sun Prairie, at this location.

If all goes well, they are planning on starting building Spring of 2015. They are going to be closing the East Towne store because they want to expand and they are landlocked at that location. Some city is going to get this new Menard's if Sun Prairie does not.

The Menard's property will be near the roundabout across from the Municipal Building on Main and Grand Ave. 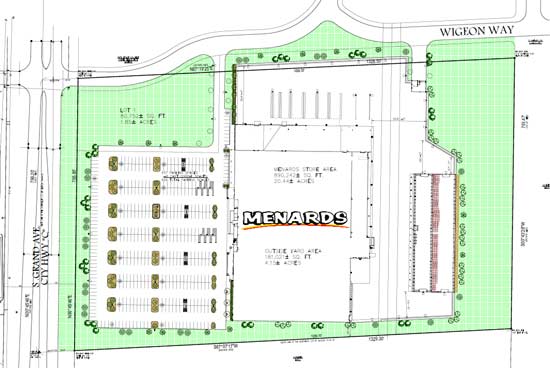 The following info has been posted on the Sun Prairie City website:


Will they close the East Towne store? One would think so. I would imagine that East Towne would not be happy about that but that Home Depot would be.

Menard's is a chain of home-improvement centers in the Midwestern United States.

In 1959, John Menard, Jr. began building post-frame buildings to finance his college education. By the end of 1959, Menard found it necessary to hire extra crews, and to purchase more equipment to keep up with demand. After graduating from the University of Wisconsin–Eau Claire in 1962, Menard purchased land in Eau Claire and built an office and shop. The company was founded in 1960 and incorporated in 1962.

Because post-frame building customers often inquired about the possibility of purchasing lumber and other products, Menard opened the first Menards Cashway Lumber.

On July 15, 1980, Menards' headquarters in Eau Claire was seriously damaged by the severe weather of the Western Wisconsin Derecho.

In 1998, Menards opened a second distribution center in Plano, Illinois.

In 2005, Menards created an eCommerce website called Menards Online Collections. All eCommerce for the company is now handled by the Menards.com website.